A retired nurse, who is a member of the Free Church in North Kessock, has been awarded a British Empire Medal (BEM) for her services to Marie Curie Cancer Care and the community. 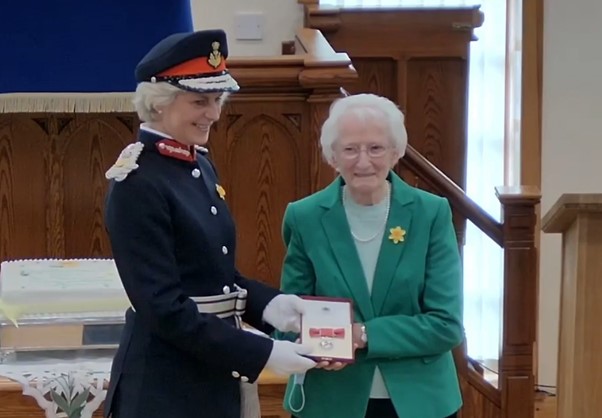 A retired nurse, who is a member of the Free Church in North Kessock, has been awarded a British Empire Medal (BEM) for her services to Marie Curie Cancer Care and the community.

A celebration was held for Di Gillies at the Knockbain Free Church of Scotland attended by family, friends and former work colleagues. She received the prestigious BEM from the Lord Lieutenant.

Guests heard that Di started her nursing career in Kyle, before becoming a Marie Curie nurse. Following her retirement, she has volunteered and raised money for Maggie’s Highlands Cancer Caring Centre in Inverness.

Dr John Adamson spoke to guests about Di’s time as a community nurse in Kyle.

He said: “Di’s qualities as a nurse were second to none. So many people in the area who needed her attention were so grateful for her endless skill and great patience; she had a lovely sense of humour and an ability to cope with all sorts of emergencies; and people wanted to speak to her for a little moral support and general advice.

“I would like to wish Di many happy times of happiness and fulfilment. I know that she is more than worthy of the award of the BEM and I know that her family too are immensely proud of her fine achievement.”

His sentiments were echoed by many others, including Dr Sandy MacGregor and Dr Will Fraser who worked alongside Di for many years.

Dr MacGregor said: “She had been an excellent Marie Curie nurse in Ross-shire from 1979 until her retirement in 2003. We worked together in the old days when GPs had a 24/7 duty of care.  Prior to 1988, there was no hospice in the highlands so there was an even greater need for the Marie Curie service.

“Di was in at the early inception when the Marie Curie night support scheme was being established and was herself very instrumental in successfully initiating the service.

“At a personal level she was incredibly supportive to those who were terminally ill and no less so to their families. One could sense the warmth and relief whenever she entered a stressed home. Nothing was too much trouble for her, even driving up remote glen roads in blizzards.

“That the local Marie Curie scheme is functioning so well is in not small part due to the wonderful pioneers who made it firstly so acceptable and then so essential.”

Since Di’s retirement in 2003, she has been involved in Maggie’s Centre in Inverness, both volunteering and helping to raise money for the centre.

She was praised for her continued support as a youth leader at the Knockbain Free Church, where she volunteers regularly and lends a listening ear and advice to young people.