Check out this month’s book reviews from Free Church Books. 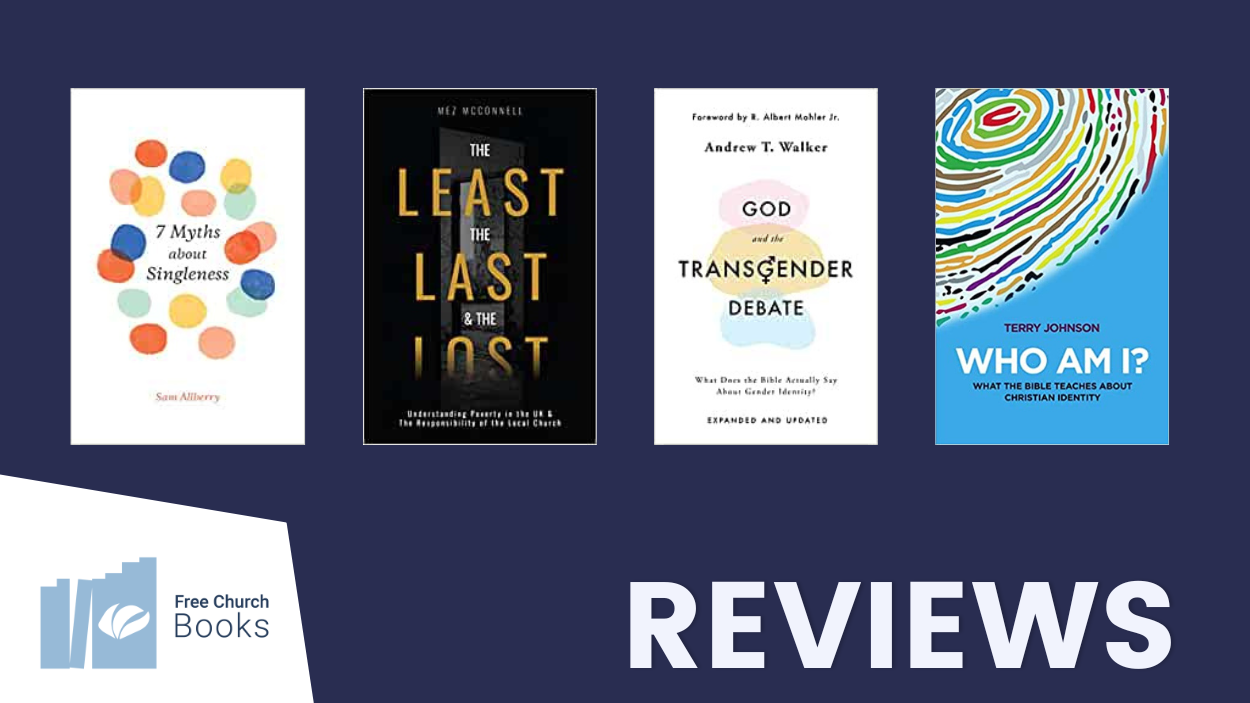 Our books this month are all about identity, but are richly varied in presenting the truth of our place in Christ.

At last! A book about singleness that I didn’t want to hurl across the room in frustration. Sam Allberry addresses this oft-ignored subject in a refreshingly forthright and realistic way by discussing 7 commonly held myths about singleness: that the single life is too hard, requires a special calling, means no intimacy, means no family, hinders ministry, wastes your sexuality and is easy. Allberry uncovers the false thinking behind each of the 7 assumptions and presents a clear biblical view of singleness as a positive gift and blessing from God. As a bonus, there is a brief appendix outlining 4 ways to avoid sexual temptation based on Proverbs 5.

Allberry is forthright about how both the modern western church and our secular society tend to favour and even idolise the coupled life, downgrading and marginalising singleness in the process. This book provides a much-needed corrective by examining key scripture passages and unpacking their often counter-cultural application, affirming the intrinsic goodness of Christian singleness. I particularly appreciated Allberry’s comments on Jesus’ singleness: ‘The marriage he came for was the one all of us who are in him will enjoy with him for eternity. His singleness on earth bore witness to this ultimate marriage he had come to establish.’ (p120) In a similar way, the presence of single people in the church points towards the reality of the life to come and celibacy itself can be viewed as a means of longing for the ultimate satisfaction we await in Jesus.

Drawing from his own experience as a long-term single, Allberry’s approach is neither glib, patronising nor stoic. As a single person, I found myself agreeing and nodding as I read through the book, thinking that this has been written by someone who has understood singleness from the inside. Written in an accessible and conversational tone, this book is a must-read not only for Christian singles but also for those who are married. Understanding what the Bible teaches about singleness is vital for helping the church fulfil its role as a true family as well as provide authority and clarity for speaking into our contemporary cultural crisis of sexuality and identity.

This book is available from Mound Books

Mez McConnell’s stated aim in writing this important and challenging book is to ‘generate fruitful discussion’. To do this, he sets out to demonstrate that those living in marginalised and socially deprived areas are currently being failed by the majority of evangelical churches, which are mainly middle class and isolated from these communities. This is a robust book both in terms of analysis and application, and outlines clearly what he feels needs to be done to enable the poor localities of the UK to receive the hope of the Gospel. The incontrovertible legitimacy of this book’s position emanates from years of practical ministry and proven experience. McConnell and his co-contributors stridently and rightly maintain that it is only the Gospel that can help those living in poverty. What is needed, therefore, they believe, is establishing and maintaining well-resourced churches preaching and living out the good news of Jesus at the heart of these neighbourhoods. It would be beneficial, indeed, if church leaders and members throughout the UK were to consider the book’s main thrust carefully and prayerfully and to address this need by urgently implementing the many proposals outlined.  The individual reader, also, will have much to ponder and enact as a result of reading this pivotal work.

This book is available from 10ofthose.com

Andrew Walker has written one of the most useful books on gender issues that I have ever read. It is sympathetically written but not in such a way as to regard anyone with pity or censure. Instead, he takes the wide view of people on both sides of the gender debate and respectfully discusses their world view before the throne of grace. He openly admits that he is heterosexual and therefore heteronormative in his views – a new word for my dictionary. This means that his understanding is not experiential but rather compassionate and loving.

Walker takes us from the Garden of Eden, where the world and human relationships were totally good and completely perfect, to the utter degradation of man’s fall into sin. As we follow the story of man being made in the image of God, to the present day of man making man in his own image, doing everything that is right within his own eyes and getting it all wrong, the depths of sadness for what might have been increase. Yet Walker has hope. It is this hope that is his guiding light throughout the whole book. Man can be redeemed even when he or she tries to put his or her body right by cutting parts of it off in order to feel better.

There is a common theme which runs through the book illustrated by Caitlyn Jenner’s Vanity Fair Cover Shot. No one, says Walker, can truly disguise the God given biological truth about themselves. We are men and women, made in the image of God, each one unique and loved beyond measure.

The most helpful part of this book has been the biblical debate simply employed by Walker to show that we all inhabit this earth together as fallen human beings. We cannot therefore dismiss anyone on grounds of sexual differences. Instead, we need to return to God’s word and be ready to live the life he calls us to in the image of which he made us, knowing that he can transform us in his likeness.

This book is available from 10ofthose.com

Terry Johnson has been the senior minister of IPC Savannah for over 30 years. A leading figure in American Reformed circles, Terry is a well-known author and speaker. My rule of thumb has been, ‘if Johnson writes it, get it’. I’ve never yet been disappointed.

The subtitle of this book is ‘what the Bible teaches about Christian identity’. This is one of the most controversial questions confronting Christians in the Western world today, especially for our younger people, as identity politics have complicated the issue. However, ‘Who Am I’ is not a critique of identity politics as much as it is a clear Biblical definition of our identity as Christians. But in order to critique the former, we need first to be confident in the latter.

Terry devotes the first half of his book to the question of Christian identity in light of the doctrine of Christian salvation. He argues for balance in our understanding of who we are ‘in Christ’. He memorably writes, ‘Who am I? It’s simple. I am a Christian, a sinner saved by grace, a disciple of Christ.’ Throughout this section, Terry helpfully drives home the force of Christian truth in areas such as race and gender.

In view of how deceptively dissimilar the culture of Western Europe is from the American Deep South, I confess that I found the second half of ‘Who Am I’ more ‘preach-able’ than the first, although for balance, both are required. I would recommend this book to all Christians for either devotional reading or as a primer for deeper study.

Terry, known for his deadpan humour, lack of common sense and liking for fish and chips from Anstruther, would sit back in his professorial study chair, pour himself a cup of English breakfast tea and smile at the question – ‘Who am I? It’s simple. I am a Christian, saved by grace, a disciple of Christ.’

This book is available to purchase from Amazon