Rev. Ciarán Kelleher has been inducted to Montrose Church Plant. 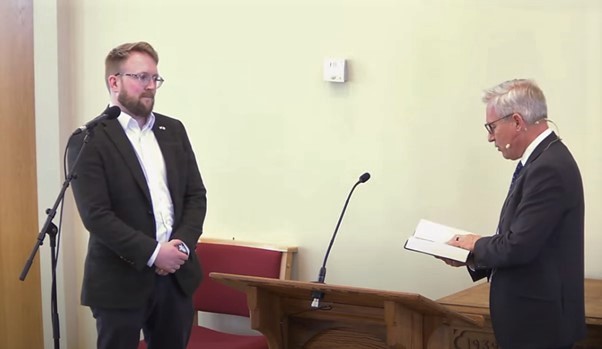 A move to establish a Free Church in Montrose has taken a huge step forward with the induction of a church planter, the Rev. Ciarán Kelleher.

He will be working alongside a group of others to develop Grace Church Montrose. A team of elders are already in place and following several interviews with Rev. Ciarán, they invited him to lead the church plant with them. It is an exciting time as the church plant moves into its next chapter.

Ciarán was licensed in the Free Church of Scotland last June, having served as a Leader-in-Training and Elder at St Andrews and Broughty Ferry. He is married to Sarah and they have one son, Tadhg.

At the induction service last month, Rev. Paul Clarke, from St Andrew’s Church, described the twists and turns of the family’s journey in ministry and how plans have come together for this next venture.

He said: “They say it takes a village to raise a child. We are seeing increasingly in Scotland that it takes lots of churches and training institutions, working in partnership together, to train a minister of the gospel for effective service.

“For me, personally, it’s a bit like watching two good friends get married. As well as having been walking alongside Ciarán and Sarah for the last number of years, many of us have been doing what we can to support our dear friends in Grace Church Montrose as they have waited so patiently for over five years now for the right time, the right circumstances, and the right man to call as their minister and church planter. We had no idea that their story and the Kelleher’s would combine in this way, but it’s been a great source of joy to us that it has.”

He added: “We want to promise you both our prayers and our support, not only today but all that the Lord has for you in the years to come.”

He concluded, saying: “Ciarán, by God’s grace, the fruit of your ministry, we pray, will be men and women who are drawn irresistibly to Christ through you as you proclaim that Jesus is Lord and who ultimately inherit eternal life because they believe in the message that you proclaim to them. It makes the ministry to which you are being ordained a ministry of incredible glory.”

The plans for Grace Church Montrose are gathering pace. God has been at work and the church has been growing in number over several years. They have been eagerly seeking a Pastor/Planter who can provide stability, direction and would equip them for works of ministry in their local communities.

Currently, the congregation are meeting in the new Montrose Playhouse on Sunday mornings. This newly opened cinema is a community financed project in the old swimming pool. The congregation will continue to seek their own building but for now, this provides a good and prominent location in the town as they endeavour, by God’s grace, to establish a healthy gospel church in Montrose.

Keep an eye on updates about Grace Church Montrose in the coming months. In the meantime you can watch the induction service here.