Buccleuch Free Church has launched an appeal to help Christians in Myanmar struggling with the current internal conflict and the the global pandemic. 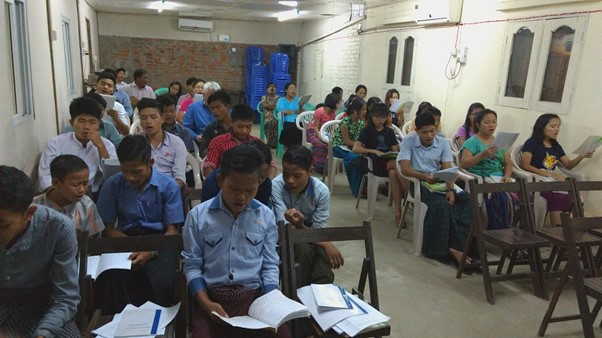 The Buccleuch Free Church congregation have been partnering with Christians in Myanmar (also known as Burma) since 2017. Links have been developed with two Chin churches, one Presbyterian and the other Protestant Reformed. On 1st February 2021, the newly elected democratic government were to convene their second term in office. However, the Burmese military staged a coup to oust the elected National League for Democracy (NLD) government and arrested the party’s main leaders, including Aung San Suu Kyi. Since then, the country has faced both political and humanitarian crises. Many people are now in desperate need of basic support including food and health care.

Burma had been experiencing 10 years of reforms that saw significant foreign investment in the country and positive changes to life and wellbeing. This had come after 50 years of oppressive military dictatorship following the 1962 coup. In February the military, known as the Tatmadaw, declared a state of emergency and took control citing that the November election had been fraudulent, despite there being no evidence to support this. Since then, they have killed over 1300 citizens, including 75 children, and over 8000 have been detained, many of whom have died in custody. The people have reacted by starting a civil disobedience movement which has effectively created a nationwide strike with most schools, universities, banks, health care and government offices being closed. An alternative government, the National Unity Government (NUG) and People’s Defence Forces have emerged to oppose the military.

The mainly Buddhist Bamar people make up the majority of the population in Myanmar. There are also many ethnic minority groups, which include Muslims and Christians. Myanmar made the international news in 2017 with the atrocities carried out by the Tatmadaw against the Muslim Rohingya people near the border with Bangladesh. The common tactics adopted include intimidation by attacking towns and villages, killing civilians, looting and destroying properties, use of sexual violence and forceful relocation of residents.

Recently the attention has focused on the majority Christian Chin people in Western Myanmar. Triggered by attacks from the Chin Defence Forces the military have reacted aggressively by attacking, killing and destroying houses and churches in some of the main towns in Chin State. In Mindat and Thantlang the people have fled, living under tarpaulins in the forest or by escaping across the border into India. It is estimated that there are now 230,00 people in displacement camps across Myanmar and 3 million people are in desperate need of food and health care.

The conflict shows no sign of coming to a rapid conclusion. The situation has been exasperated by the widespread impact of Covid. Many of our Chin Christian friends in Myanmar are suffering due to the fighting and civil disobedience action. Buccleuch recently set up an appeal to support Christian brothers and sisters in Burma at this time of extreme suffering.

Donations can be made via the Buccleuch website at buccleuchfreechurch.co.uk/give and by selecting Burma Appeal from the drop-down menu.