A Tribute to Rev. Neil Macdonald 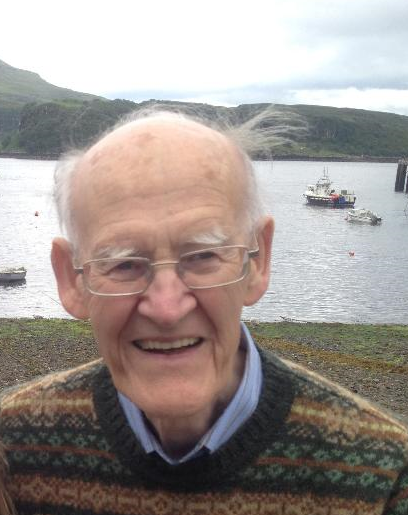 Neil Macdonald was born in Greshornish, Skye, in 1932, the youngest of a family of five.  He attended Edinbane Primary, and Dunvegan Junior Secondary school.  His intention was to leave school at 14 and follow two of his brothers into a trade.  However, his parents sent him on to Portree High School and then Edinburgh University.  From a Gaelic-speaking household, he earned prizes in Gaelic at both school and university.   He was later to be Gaelic editor of the church magazine, The Record, for 16 years.

Neil became a Christian at an early age and while at university he felt called to the ministry but tried to side-step this by training to be a teacher at Moray House.   When he realised that the call to ministry was inescapable, he reluctantly responded, and applied to the Free Church College, Edinburgh.  After completing his studies there, he was called to the congregation of Ardelve in Lochalsh, in 1959, and then to Fearn  in 1970, where he ministered for 27 years.

It was during his time in Ardelve that he married Cathie Mason whom he met whilst a student in Edinburgh.   They were married for almost 60 years and were blessed with 3 of a family; Mary, Rona and Niall Iain, and 4 grandchildren, Corrie, Finlay, Hannah and Catriona.

The family home was a happy, hospitable place where family worship was held every day.  Neil enjoyed spending time with family and was delighted to be able to watch the grandchildren growing up; taking pleasure in the fact that they all learnt Gaelic.   He was a great storyteller, recounting memorable stories of Greshornish, and life on the croft.  He always had a good rapport with children, regularly visiting local schools to teach Bible stories and being involved in the Youth Fellowship and Church Youth Club over many years.

Neil was a wise and faithful pastor with a friendly and welcoming manner.  He knew his people well and was highly respected by both young and old in the communities he served. He was a man of prayer and brought everything to God.  He rated integrity highly, and did not tolerate double standards in his own life.  Of a humble disposition, Neil would never seek positions of leadership.  However, his diplomacy and ability to handle difficult situations in a wise and fair manner, were recognised by others, and he served as convenor of various church committees, and as Presbytery and Synod clerk, for several years.   He was Moderator of the General Assembly in 1996.  Neil preached in both English and Gaelic and was often invited to preach at communion weekends in the islands as well as on the mainland.

From a lineage of stonemasons, Neil initiated the construction of new buildings in both his charges.  His technical skills were often put to good use around the home, particularly since his retirement.  He built and restored furniture, repaired boats and engines and would try his hand at almost any DIY task.   He had an array of tools but his system for storing them was to lay them down in the garage on the spot where he last used them.  With drills, sanders, hammers, fishing rods, mowers, wheel-barrows all on the garage floor, it was quite tricky to find anything again!

Over the last few years, Neil had many health issues, but he was upheld throughout by the Lord and was lovingly cared for by his wife Cathie, until he passed away peacefully into glory on Sunday 3rd July 2022.   We commend the family to the prayers of the church.

2 Cor. 4:5 – For we do not preach ourselves, but Jesus Christ as Lord, and ourselves as your servants for Jesus’ sake.